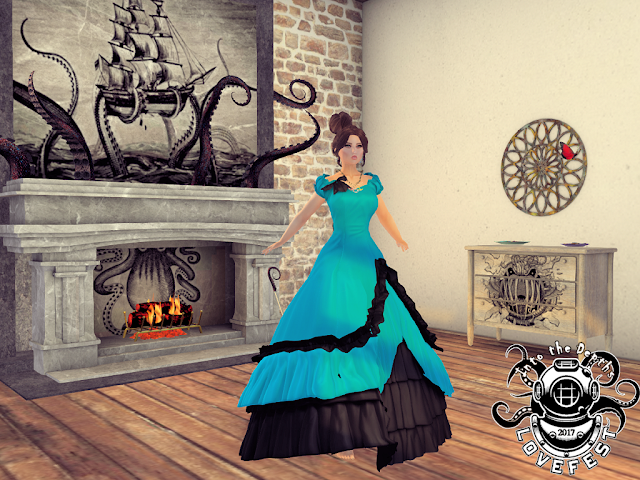 The Miller family were high society, aristocrats and deeply immersed into the political scheme of things. When Mr Luden Miller returned from time out at sea, he brought home some oddly decorated furniture. His family, demurely accepted his need to have it in the house, chalking it up to the strange temperament of a sea captain.
It began a few days after his return, the man was bed bound, suffering seizures and screaming nonsense. His wife was beside herself and didn't know what to do, and as the best doctors in the city were up in his room examining their patient, the youngest of the daughters wandered downstairs. She was curious about the new furnishings and tried to make sense of the strange drawings upon them. A small piece of paper, caught in between the drawers drew her attention and as she reached for it, she noticed a strange and eerie sound. Turning to look in the direction it came from, she stood frozen in place as large tentacles appeared to be reaching out of the fireplace. Slumping down to the ground, she lost consciousness as her brother rushed in and called for a doctor... 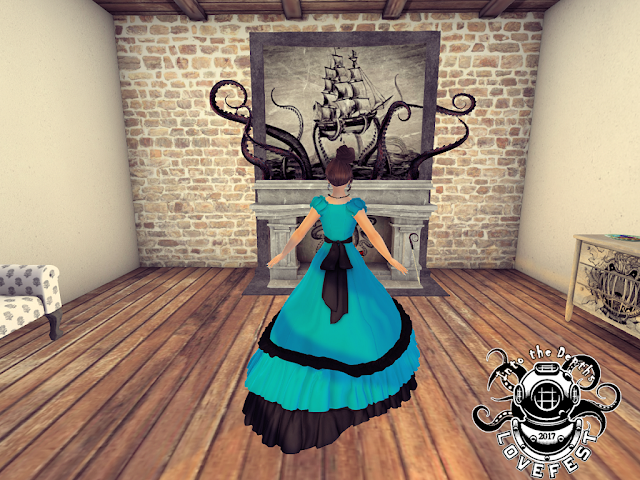 Furnishings: Simply Shelby created the amazingly creepy Cthulhu Fireplace Set. This set includes a fireplace with two options, continuous flame or flame with on/off script.You will be able to find this amazing item at the LoveFest August 17-27. This event is a celebration of H.P. Lovecraft's 127th birthday. Shopping, hunting, entertainment and roleplay can be found at the festival.
For more information check out their link here:
https://lovefest.wordpress.com/about/lovefest/
Schedule of events at the festival can be found Here:
https://lovefest.wordpress.com/events/full-schedule/

Pose: The pose used is called Long Grass, by FOXCITY. This was their June VIP Gift. With arms reaching out as if walking in tall grass, brushing fingertips as you walk along. 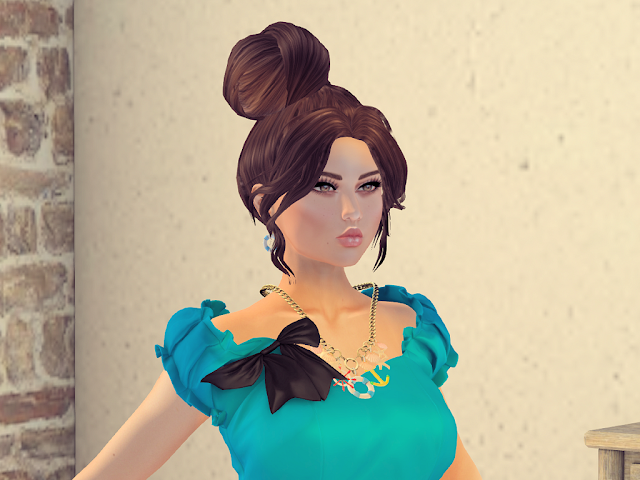 7 Deadly s[K]ins is having a special event in store right now for their VIPs. It is the Harvest Days advent calendar, a different skin for men and women each day for only 1L. This skin, named Melania, is an  Omega face applier based skin. And is the prize for Day 16 of 31 days. Melania includes Omega face appliers for Caramel ( plain version worn here with Catwa Catya head and Maitreya body), chestnut, cotton, taupe, pineapple , powder, sand, in glamour and plain versions. Also includes tango, slink, phatazz, and body appliers.  Mens gift also included in the box!
!!Firelight!! is participating in the Skull N Bones Hunt August 6-Sept 6 with the lovely updo Tabatha in Wood tone as their prize. Rigged mesh hair with 5 color hud & color tinting wheel included.

My eyes are the IKON Triumph Eyes in the Loam color. These include mesh and system eyes in 4 sizes, along with a placement hud. 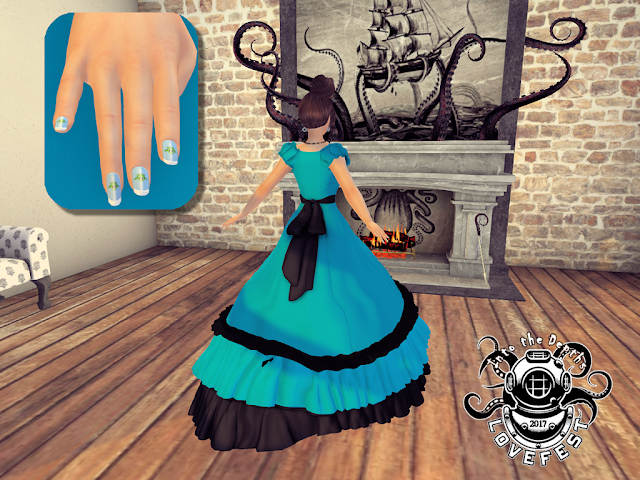 Bleat created the Cutesy Cthulhu manicure that I am wearing. This comes with appliers for Slink & Maitreya with a texture hud containing 5 different color options. Another exclusive item for LoveFest 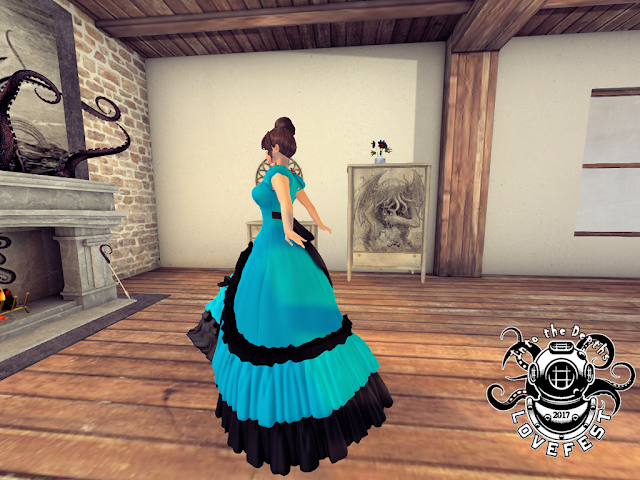 **Mistique** also has a fantastic exclusive for LoveFest. This dress named, Ariel is available in several color choices such as blue, purple, lilac, pink, yellow and red. It is  compatible with Belleza, Slink, Maitreya, standard and fitmesh sizes. 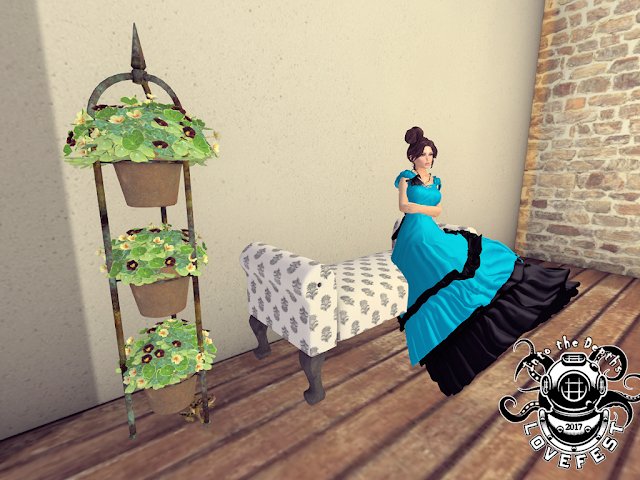 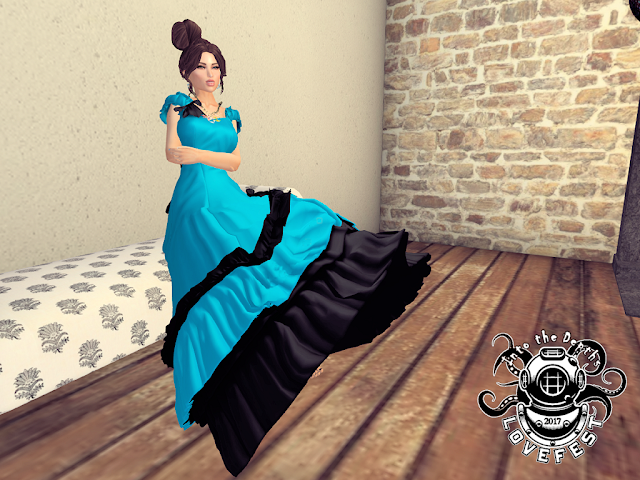 Also at the festival is more items by Simply Shelby. The Nasturtium Planter - B&W adds a lovely touch to your decor. And the Vintage Upholstered Bench in Black & White is a great place to rest with several sitting animations. 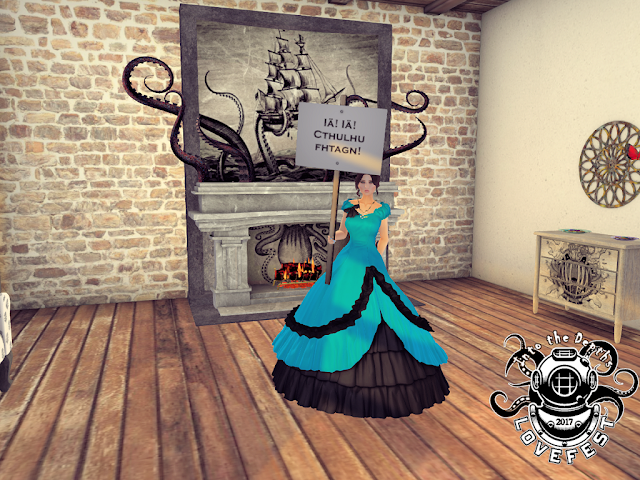 Bleat also has a handheld sign for supporters and protestors of Cthulhu, at LoveFest. This is one of the supporting items called, Cthulhu Praise. 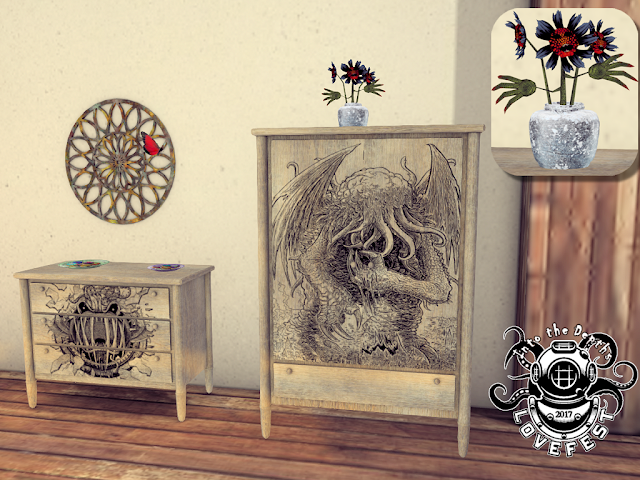 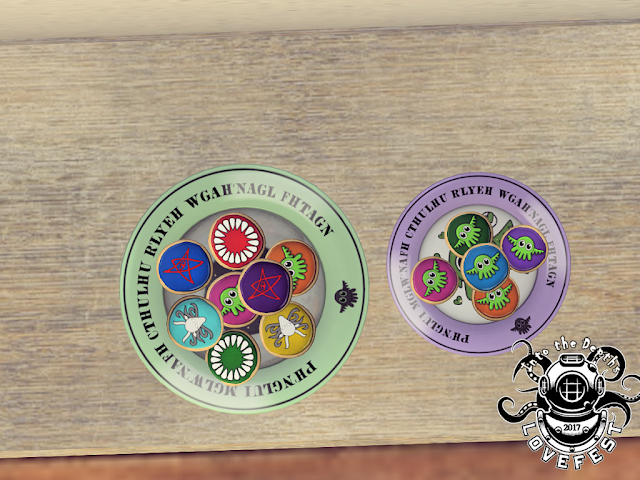 Bleat has some more items for us, which I placed on top of the dress. The Mini Cthulhu Plate is a RARE in their gacha collection for the event and there is also a
Plate of cookies called the Watcher Plate, which is 1 of 2 plate designs.
The cookies disappear and are given to the person who clicks. The plate will refill after all cookies have been given out. Found only at LoveFest
♥♥♥♥♥♥♥♥♥♥♥♥♥♥♥♥♥♥♥♥♥♥♥♥♥♥♥♥♥♥♥♥♥♥♥♥♥♥♥♥ 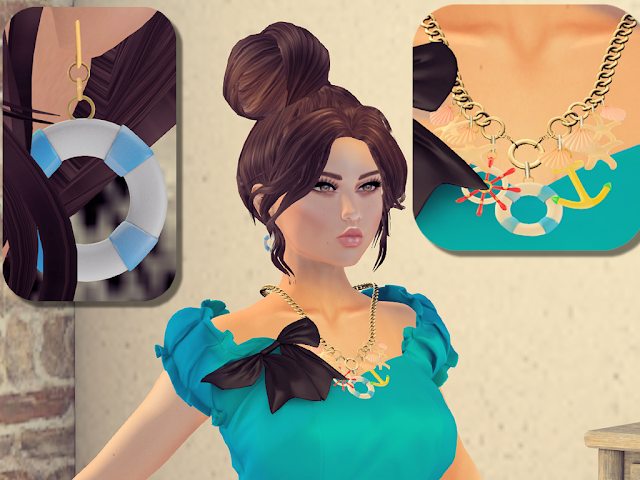 Chop Zuey  has some more fantastic gifts out for their VIP and even some for non-VIPS! Just in time for beach parties and gatherings, we have the She Sell She Necklace and separate gift, She Sell She Earrings. Both of these contain resize scripts and can be found at the main store. 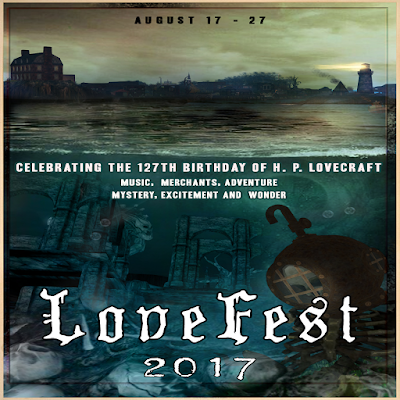 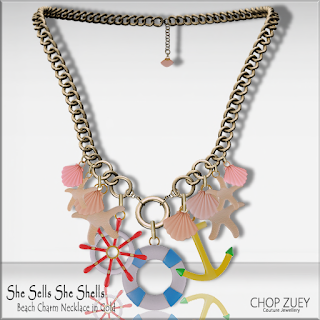 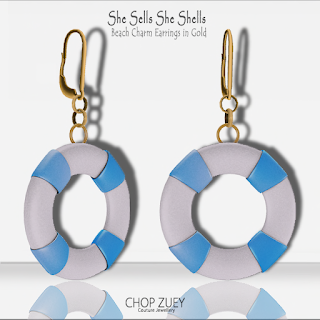 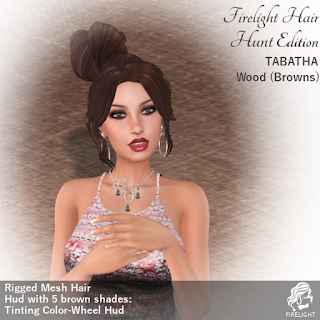 Posted by Aerlinniel Vella at 7:51 PM