A Story for Santa

Aerwen looked up to see 'Scary Santa' standing over her bed and thought this was a perfect time to tell him a story! So she called him over and picked up her favorite book of stories written by her mother, Gwen. Confusion shown upon Santa's face as this little girl who was OBVIOUSLY not afraid, calmly read the book...
"Once upon a time long ago in a far off land known as the North Pole. There lived a mighty Elf known as Mr. Freeze. One day while out sled riding across the rooftops, he landed on the jolly old fat man who looked a lot like Santa. You kind of look like he did back in the day. Anyways, pee yew, can you please put on some deodorant? So the Elf left some marks on his forehead from the Sled and he wandered around following the little animals for weeks and weeks."
After a few minutes of Aerwen reading the book, Santa reached up, scratched his head with a puzzled look on his face. He said "Enough Enough! I can't take it anymore!" And vanished, running, into the night. 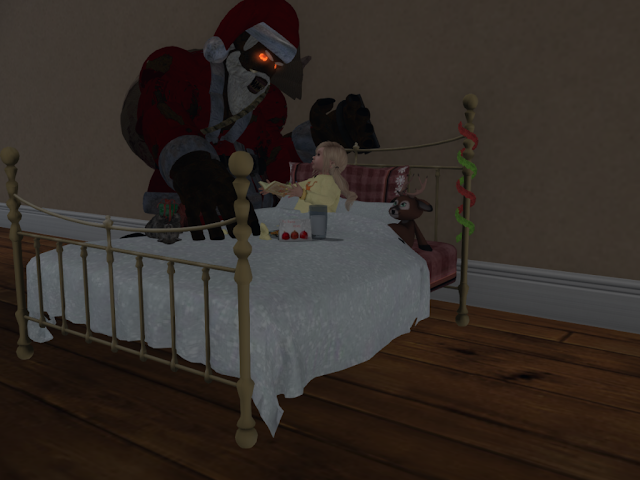 Thank you to Aerwen Melodie (Roughneck) for being such a great model for this pose!

This great pose prop which includes the bed and all on it (Santa and Aerwen not included), is a creation by Something New.
It is called Christmas Story Time. It is their group gift for December! It includes one child and one adult pose.

Hair is Karlie by Truth Hair

Her PJs are Toddleedoo Unisex Jammies in yellow-orange cat, by Sweet Intoxication Kids.


Posted by Aerlinniel Vella at 8:05 PM